It’s taken me a while to get into IPAs. For years I found them a struggle – too hoppy, too dry, too few of the dark, biscuity malt flavours that I love so much.

That all changed when the Americans got involved. They’ve siezed upon pale ales with gusto, packing in an inhumane amount of hops into each of their ridiculously strong brews (it’s not a proper American beer if it doesn’t contain at least five hop varieties, all beginning with the letter “C”, after all). I’m generally not a fan. But after turning my nose up at a load of sextuple-hopped nonsense from Colorado, I’ve learned to appreciate the drier, hoppier flavour profile in more traditional IPAs.

So I went into this latest three-way tasting with an open mind.

Given that my dearest friend is called Robinson and sports a beard, I could hardly turn this one down. It’s a moderately strong IPA – 6.0% is fine for sipping slowly on a summer afternoon, but you wouldn’t drink it all night. The label says to expect a fruity, citrus zing.

It’s amber in colour, and very clear – that and the lack of head suggests it’s gone through some pretty aggressive fining and filtration. As promised, the aroma is fruity and citrussy, with notes of orange blossom.

On the tongue there’s a decent amount of fizz, and more of the marmalade and orange blossom flavours from the aroma. Slightly unexpected is the hint of sherbert: Beardo is somewhat sweeter than I was expecting.

What it doesn’t taste like is a 6.0% beer. With that much alcohol to work with, I’d expect to find more depth of flavour than Beardo is offering.

I was honestly surprised when I dug into the small print on this beer to find it was from Thwaites. All the branding points towards America, with the revolutionary references and name harking back to the original thirteen states.

Guns is dark amber in colour, and fairly clear. There’s some roasty malt aromas coming off as well as the fruit; a definite hint of rye. The taste is rich and surprisingly dark too. That rye comes through strong here, backed up by caramel, resin, and a bit of passion fruit.

In all, a pretty well-balanced beer. Not perfect, but not at all bad.

Clarity is for those English wusses. In Belgium, they drink their beers unfiltered. 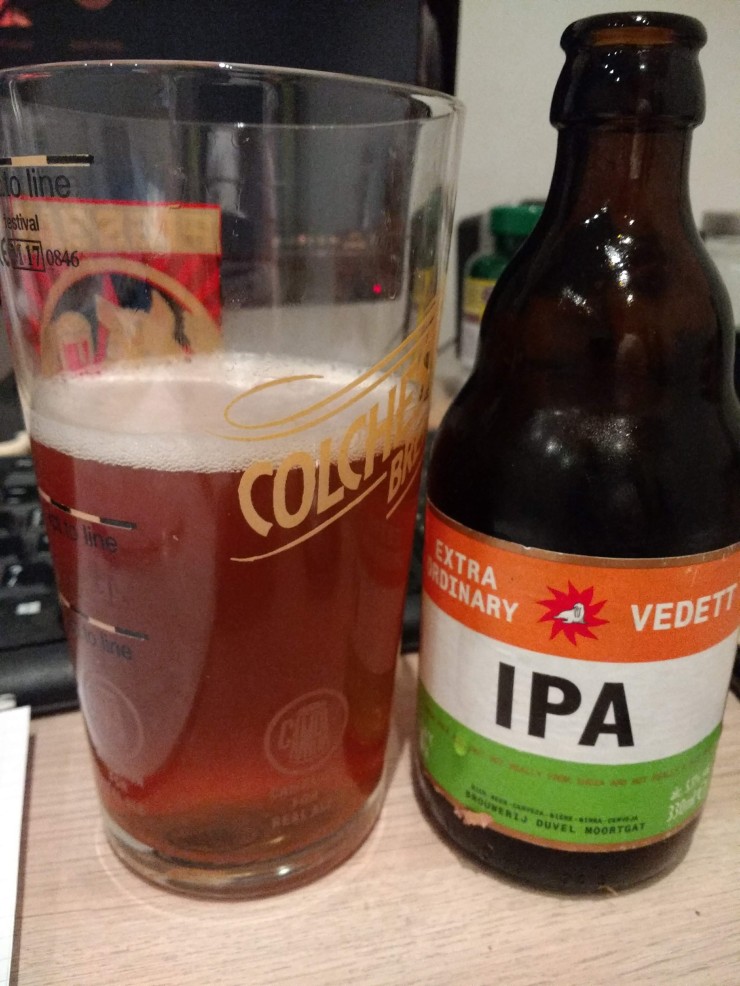 Hazy and amber in colour, with a strong whiff of alcohol coming straight off. It’s earthier and less fruity than the other IPAs I’ve had today.

To be honest, this doesn’t taste like an IPA at all. It’s a Belgian blonde – a little weaker than your standard Belgian perhaps, but certainly no hoppier. It’s disappointing, honestly. I was hoping for something special here.